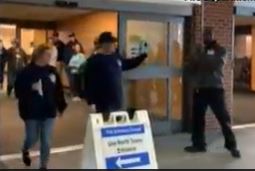 Firehouse.com is reporting that Winston Salem Firefighter Ross Flynt was released from the hospital Wednesday after he and others on his crew were shot at a local hot dog restaurant. A car entered the parking lot and the occupants opened fire injuring him. Flynt and one civilian were struck by bullets and transported to the hospital for treatment, two men were arrested in connection with the shooting.