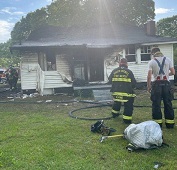 WBTV is reporting that a home in Enochville was destroyed by fire on Sunday. The fire was reported at approximately 5:30 p.m. in the 1000 block of N. Enochville Ave. Officials report that the fire began in the bedroom of the house. The house is a total loss. The Greater Carolinas Chapter of the American Red Cross was called by the Enochville Fire Department to offer help to one person who was displaced by the fire. No injuries were reported. PHOTO Credit: WBTV