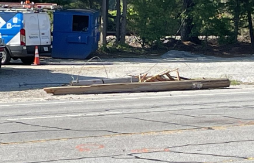 WBTV is reporting that police in Salisbury have released new information regarding the accident that took the life of a person driving a motorcycle on S. Main Street on Sunday morning. According to police, a suspected drunk driver ran into and broke a pole in the 3000 block of S. Main St., near Red Acres Rd. on Sunday morning just after 3:30 a.m. Lines then fell down from the pole and were hanging low on the street. A person driving south on a motorcycle ran into the power lines. That person was pronounced dead at the scene of the accident. Police say the investigation is still ongoing. They say the driver of the vehicle involved in the initial accident had the “odor of alcohol.” Findings of the investigation are being turned over to the District Attorney’s Office. More information will likely be released soon. This story will be updated. PHOTO credit: WBTV