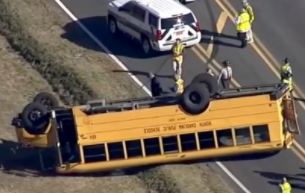 The driver of a Johnston County public school bus that overturned on its side Monday afternoon in Clayton has received a ticket for failing to maintain lane control. The 48-year-old woman was not impaired and was not speeding at the time of the crash, said 1st Sgt. J.W. Collins of the North Carolina State Highway Patrol on Tuesday. “It was a matter of driver error,” he said. “Running off the road to the right and then over-correcting — that started the chain of events.” The crash led to eleven Cleveland High School students and the bus driver being hospitalized with injuries, officials said. The driver sustained serious injuries, but they were not life-threatening, Collins said. Only one student was taken to a non-local hospital for a higher level of care, but the injuries were not serious or life-threatening.