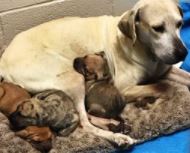 The owner of a northeastern North Carolina kennel has been accused of dozens of animal welfare violations after authorities seized over 60 dogs from what were called “inhumane” living conditions. Currituck County officials took away the adult dogs and puppies after responding Friday to a report of stray dogs running lose on a road in Moyock. Animal control officers who arrived discovered a number of dogs in outdoor kennels that “were extremely unsanitary,” according to a county press release.