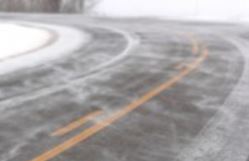 A road covered in black ice caused two accidents in Mooresville Saturday morning, leaving one person seriously injured. According to the Mount Mourne Fire Department, the first accident involved two vehicles at the 500 block of Faith Road. One was overturned. One person was taken to a hospital with life-threatening injuries. While crews were responding to the wreck, a second wreck happened because of the black ice. No injuries were reported with the second wreck.