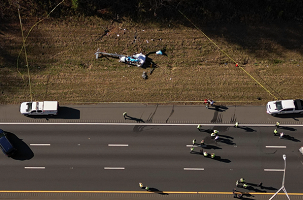 Queen City News is reporting that Federal investigators said the Charlotte Airport control tower did not receive a distress call from the pilot of WBTV’s Sky 3 helicopter  that crashed along I-77 on Tuesday. According to a statement from the National Transportation Safety Board, the Robinson R44 helicopter took off from the WBTV helipad and  flew south for about five miles before “descending rapidly” into the ground next to the highway. Meteorologist Jason Myers and pilot Chip Tayag were both killed in the impact.