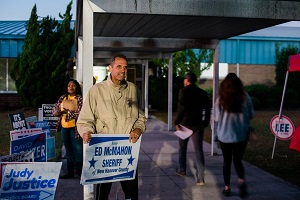 In Iredell County, Sheriff Darren Campbell ran unopposed. The results of Tuesday’s election show that half of the state’s newly elected sheriffs align with their predecessors’ party affiliations, and half affiliate with different parties than their predecessors. Of the 12 counties that elected sheriffs with a different political affiliation, seven switched from a Democrat and two switched from an unaffiliated leader to a Republican. Voters in two counties — Granville and Halifax — replaced Republican sheriffs with Democratic sheriffs, and Graham County elected an unaffiliated sheriff over the Republican candidate. The state is now home to 64 Republican, 35 Democratic and one unaffiliated sheriffs.