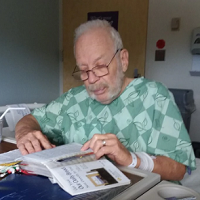 UPDATE: This Silver Alert has been cancelled.

WBTV is reporting that a Silver Alert has been issued for a missing man out of Rowan County. Police say 82-year-old Harold Coon went missing from Brookstone Way in Granite Quarry Sunday night at around 8.  They say he was headed to a pharmacy. According to authorities, Coon is white, standing 5-foot-4 and weighing 175 pounds. He has short, gray hair, a gray beard and blue eyes. The Silver Alert from the North Carolina Center for Missing Persons says Coon is believed to be suffering from dementia or Alzheimer’s. The Granite Quarry Police Department is asking for help from the public. Coon may be traveling in a 2008 gold Chevrolet HHR with NC license plate number TDP4783.  If you happen to see Mr. Coon driving, please call the Granite Quarry Police Department at (704) 216-8500. Again, that license plate number is TDP4783.