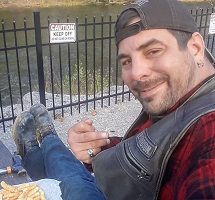 You won’t hear this story from the liberal media. Shocking footage showed the moment a disabled white man was shot by the Cherokee SWAT team, despite obeying their orders. Jason Kloepfer, 41, was shot several times by the Cherokee Indian Police Department SWAT Team after authorities received a call about gunfire in the area on December 12th around 11pm. Police suspected Kloepfer was the alleged shooter and was holding a hostage. Kloepfer can be seen in surveillance footage from inside the trailer opening the door with his wife Alison just behind him as both of their hands were raised. Seconds later, officers fired several rounds at Kloepfer as he collapsed to the floor. He was transported to the hospital in critical but stable condition. An investigation is underway. To watch video click here