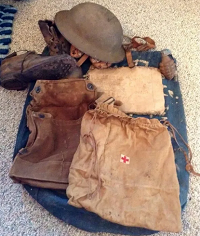 WNCN is reporting that a Fort Bragg soldier living in Fayetteville is offering a $500 reward  after he said someone stole a package containing his great grandfather’s  World War I military items. Ben White said the box on his porch contained the following items of his great-grandfather’s:

White said he is currently serving in the Army just like his grandfathers before him, and that he is stationed at Fort Bragg. Photo credit: Ben White