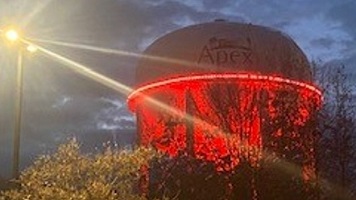 A Wake County middle school principal died at school Monday, according to the school district. Karen Sinders was the principal of Lufkin Road Middle School and that’s where she died unexpectedly Monday. No further details have been released about her cause of death. The water tower outside of the Apex Town Hall was lit red Tuesday as a tribute to her life. She was a shining light of the community, according to Mayor Jacques Gilbert.