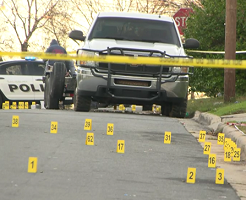 WBTV is reporting that Police in Salisbury confirmed that two people were shot at a house party on Sunday morning. Neighbors reported “dozens” of shots fired on Messner Street, between W. Horah and W. Monroe. Two people suffered gunshot wounds and were taken to the hospital. One person remains there, and the other was released after being treated for gunshot wounds. An investigation is underway.