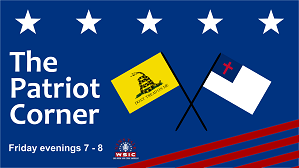 Tonight will be the debut of “The Patriot Corner,” a new show on News Talk WSIC, hosted by Micah Phelps and Ike Branham. The show will focus on the core principles of faith and freedom, with straight talk, based on Biblical truths. The Patriot corner will also take a close-up look at the lies and gossip that are constantly being spread by the liberal media and liberal politicians. “The Patriot Corner” airs Fridays from 7 to 8pm, starting tonight.