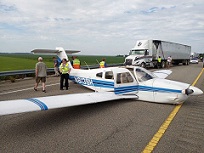 WRAL TV is reporting that a single-engine plane had to make an emergency landing on a Washington County, North Carolina highway on Monday, but no injuries were reported, officials said. The Washington County Sheriff’s Office said the plane landed on Highway 64 west of Creswell, news outlets reported. The pilot heading from Dare County to Plymouth experienced a loss of power and when he set the Piper Turbo Arrow down without landing gear, it skidded across the highway, Lt. Charles Arnold said. PHOTO credit: WITN TV