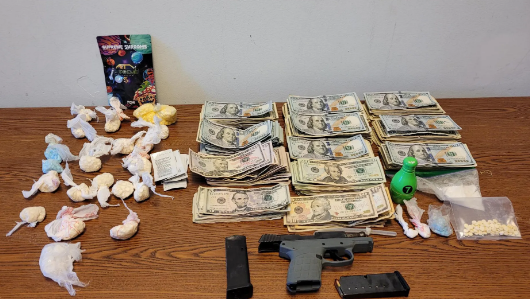 Queen City News is reporting that a drug stash, cash, and a handgun were seized when a warrant was executed on a man in Mooresville on Saturday, according to police. Officers began investigating 33-year-old Mooresville resident Nicholas Tucker regarding the distribution of fentanyl pills following a tip, according to the police report. Warrants were executed on Friday at two locations and 2000 fentanyl pills, 22 grams of cocaine, mushrooms, and marijuana was seized. $9,000 in cash and a handgun were also discovered and Tucker, who was already out on bond, was arrested. He faces multiple drug-related charges and was given a $750,000 secured bond. Tucker has a criminal history dating back to 2008 that includes multiple drug-related charges involving cocaine and heroin.