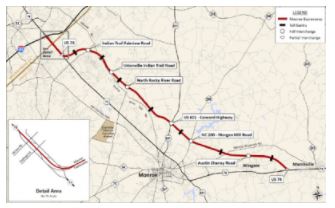 The North Carolina Turnpike Authority will save more than $8.7 million after the Local Government Commission signed off on its request to refund bonds issued to construct the Monroe Expressway, one of the busiest roads in North Carolina. The 18-mile toll road runs from near I-485 in Mecklenburg County to U.S. 74 between Wingate and Marshville in Union County, which is a commercial corridor. It has eight interchanges. The Monroe Expressway was the first toll road in the Charlotte area, designed as a high-speed regional alternative to relieve congestion and stop-and-go traffic at about 24 stop lights on U.S. 74 in Union County.