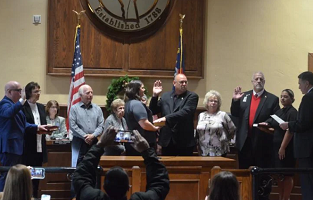 The Statesville Record and Landmark is reporting that the Iredell County Board of Commissioners swore in its recently elected members yesterday morning, as Bert Connolly joined Brad Stroud Sr. and Gene Houpe on the governing body. Connolly is the newest member of the board as well as its new vice chairman. While the three men were elected in November, Houpe was an incumbent and Stroud was sworn in just after the election to fill a vacant seat after the death of Marvin Norman. Photo credit: Statesville Record and Landmark