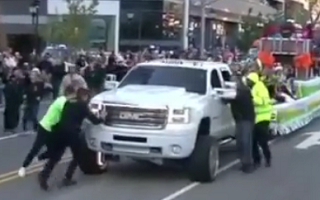 WTVD is reporting Raleigh police officers confirm the girl accidentally hit by a truck towing a float during the Raleigh Christmas Parade on Saturday has died. Police said the accident happened around 10:15am near the intersection of Hillsborough Street and Boylan Avenue when the driver said he lost control of the truck. He hit the child at a low rate of speed, police said. The parade was canceled immediately. The driver, Landen Glass, 20, is facing multiple charges, including misdemeanor death by motor vehicle.