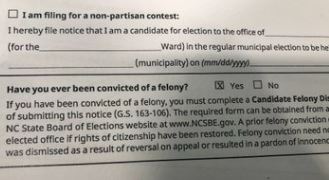 Queen City News is reporting that Patrick Cannon, a former Charlotte mayor who served time in federal prison for accepting bribes in office, has filed to run for the Charlotte City Council at-large seat. Cannon was elected as the city’s 56th Mayor in November 2013. He was sentenced to 44 months in prison after accepting more than $50,000 in bribes, mostly from undercover FBI agents when he was in office.