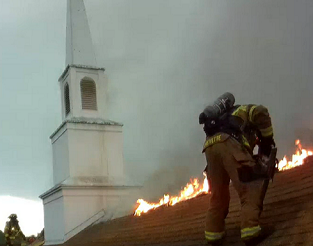 Officials now say lightning sparked a fire that damaged the chapel at Barber Scotia College in Concord yesterday afternoon. According to the City of Concord, crews were called out around 4:40pm. When they arrived, they found smoke coming from Kittie Sanson Chapel on the campus located at 145 Cabarrus Avenue W. No one was in the chapel at the time. Firefighters were able to get the flames under control within 30 minutes. PHOTO credit: WBTV