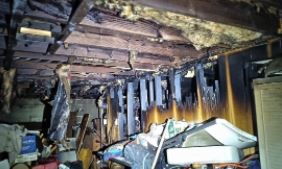 WBTV is reporting a fire in the basement of a house in Rowan County caused damage throughout the residence. The fire was reported yesterday morning just after 6am in the 400 block of Neel Road. Fire officials said firefighters were able to contain the fire to the basement, but there was some smoke damage in the home. The American Red Cross is helping three people displaced by the fire. No injuries were reported. Photo: American Red Cross.