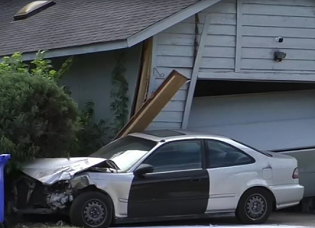 A Fayetteville teenager taking a joyride in his grandfather’s car lost control and crashed into two homes and two cars, police said, adding that no one was hurt. Police said the call came in at around 10am, news outlets reported. According to police, the 15-year-old was speeding around a corner when he lost control, drove through a front yard and hit a car in a driveway before hitting a garage. Police say that so far, no charges have been filed. PHOTO credit: CBS-17