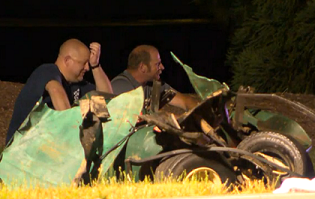 According to the North Carolina State Highway Patrol, the golf cart collision with a vehicle last week has claimed the life of another member of the Marlowe family. 13-year-old Jada Marlowe, of Statesville, died Monday. Her father, Michael Marlowe and younger brother, Bently, 5, were on the golf cart with three other family members on Fort Dobbs Road in Statesville when authorities say a 2009 Honda Accord crossed the center line and hit the golf cart. The driver of the Accord, 23-year-old Austin Ray Harmon, of Statesville, was arrested and charged with driving while impaired, two counts of felony death by vehicle and three counts of felony serious injury by vehicle, according to the highway patrol. Additional charges against Harmon are pending the ongoing investigation and consultation with the Iredell County District Attorney’s Office, troopers said. PHOTO credit: WBTV