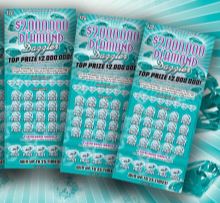 Neal Badolato took a chance on a scratch-off lottery ticket at a Harris Teeter in Cornelius, and it paid off. Badolato, won the $2 million grand prize with his $20 Diamond Dazzler ticket, according to N.C. Education Lottery officials. Badolato had a choice of receiving an annuity of $100,000 over 20 years or a lump sum of $1.2 million. He chose the lump sum and took home $852,126 after taxes, lottery officials said.