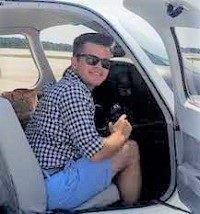 Back in July, we told you about the co-pilot of a small plane in Raleigh either jumping or falling to his death as his plane was making an emergency landing. Since the autopsy report was released yesterday and the co-pilot’s death has been ruled an accident. Charles Crooks, 23, was one of two people on board the small plane that tragic day on July 29th. The pilot survived, while Crooks, 23, fell out of the plane just before the emergency landing.