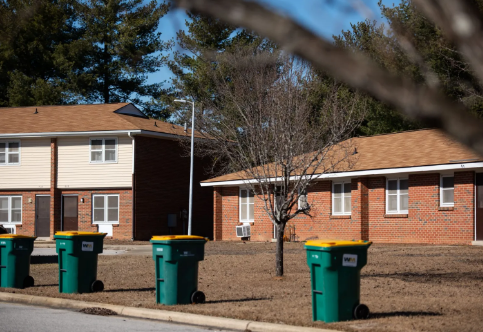 Some North Carolina counties taking state-allocated rental aid may have to use local funds to disburse it, as fees used to fund that process are lower than what was allowed with previous allocations due to a different set of rules.

The state’s relief comes from the $46 billion Congress approved through federal stimulus. The assistance was created to curb evictions due to widespread income loss at the height of the COVID-19 pandemic.

This was split into two rounds of relief: one from the December 2020 stimulus and the other from the American Rescue Plan Act in March 2021.

To allow for state and local governments to pay for the disbursement of this aid, the U.S. Treasury allowed for 10% of the funds in the first round of relief to be used for administration.

For the second round of assistance, that increased to 15%.

The state government’s over $1 billion in rent relief, however, was limited to a lower percentage.

In Senate Bill 172 from last year, the state legislature divided portions of its allocation to those same 12 counties, but it limited administration fees to just 5%.

For some counties, that lower rate may not cover disbursement costs. If the county decides to take the money, any additional expenses may have to be paid for with local dollars.

Cumberland County, for instance, is set to receive more than $31 million in rent aid from the state, but the administration fee won’t be enough to cover the salaries of its rent relief staff, according to county officials.

Of the 25 positions that Cumberland has listed for applications, three will be funded by the Department of Social Services budget, each at an annual salary of nearly $32,000.

But additional dollars from the county may be needed. County officials said in an email that it hasn’t determined whether enough DSS money is available to cover the salaries.

DSS is set to take over the program as the county Board of Commissioners, by unanimous vote, unofficially approved having Social Services handle administration at a previous meeting.

At Monday’s meeting, the board will vote on whether to finalize the move.

‘An expensive program to run’

Buncombe was one of the counties that took rental aid from the state.

To disburse the money, county dollars are being used due to the limitations of the 5% administrative fee, said Phillip Hardin, Buncombe County’s economic services director.

“At the end of the day, it’s an expensive program to run,” he said. “It’s a very labor-intensive program with a lot of work involved.”

That work involves processing applications to ensure the tenants meet aid requirements. Staff members must work with applicants to verify that they earn 80% or less of the area median income and that they lost income due to the pandemic.

“We’re using staff who work in programs that have revenue attached to them, such as food assistance and Medicaid.”

That’s not necessarily universal across the state. Hardin said it depends on the county.

“Counties pay different amounts,” Hardin said. “We pay fairly well in Buncombe, versus maybe another county that doesn’t pay and have benefits like we do.”

According to the job listings for Cumberland, DSS will offer benefits to those who take the positions.

Cumberland DSS Director Heather Skeens said in an email that the salaries are equivalent to current DSS positions.

Despite the decrease in administration funding from the state, Hardin said that the efficiency and the speed of the program in Buncombe have not been affected.

The fee limitation will not impact the performance of Cumberland’s program either, Skeens said.

While the state allocations are limited to a 5% administrative fee, an additional 5% in housing stability services is allowed. That funding can include, among other things, paying staff to speak with and obtain documentation from landlords. The money can be used on social workers who attend court to assist tenants with an eviction case.

“When we were told that it was changing from 10% to 5%, we needed to shift pretty quickly,” she said. “We were already in conversation about how we could use technology to our advantage and reduce people power, because our program was driven by people power, and it was efficient, but it needed to have more efficiencies.”

“We put more people into the housing stability services, which gave us the ability to serve those on the ground in the courthouses,” she said. “It was a shift, but I would say it was a good one. We weren’t thinking in that manner before.

“It’s hard to be upset about the change when it was a positive outcome for us.”

While the limitations of the state legislation led DreamKey to invest in housing stability services, they were allowed beforehand at a higher rate.

Both rounds of the direct federal allocation allowed 10% in housing stability. That’s on top of the respective 10% and 15% in administrative fees in the first two runs of relief.

With that flexibility, Cumberland’s previous administrator, Innovative Emergency Management, used the maximum 25% of the aid at one point for administration and housing stability, Carolina Public Press previously reported.

In Buncombe County, Hardin said he preferred the previous rate.

“I would hope that they would have kept it at what Treasury kept it at,” he said.

Cumberland will use the housing stability funds to pay case managers to work on the ground with landlords and renters, obtaining documentation when necessary from each, while also assisting tenants in court in preventing evictions, when appropriate, Skeens said.