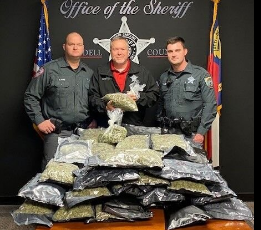 Victor Curtis Morrison Jr., 34, from L.A. faces felony drug charges after being stopped by the Iredell County Sheriff’s Office on Wednesday. The Interstate Criminal Enforcement team conducted a traffic stop on a 2020 Ford Expedition on Interstate 77 South at Tomlin Mill Road for a traffic violation. Deputies spoke with the driver and suspected drugs were in the vehicle. Canine Abby was called to the scene, and found 66 pounds of marijuana hidden in vacuum-sealed bags in a large duffel bag in the rear cargo area of the vehicle. The street value of the marijuana was $299,680, the sheriff’s office said. Morrison was arrested without incident and taken to the Iredell County Detention Center on multiple drug charges.