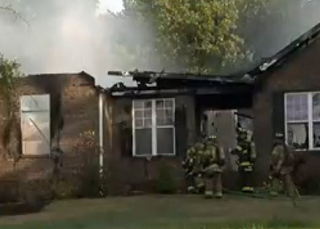 WBTV is reporting that a Cabarrus County home is a complete loss after flames tore through it yesterday. The Fire Marshall’s Office says the call came in at 5:19pm yesterday for the home on Guildbrook Road in western Cabarrus County. By the time fire crews arrived seven minutes later, the flames had taken over 30% of the home. No one was hurt and now the Red Cross is helping the family of five that lived there. Investigators are still working to determine the cause of the fire. Since the neighborhood lacks fire hydrants, Odell Fire immediately initiated the Tanker Task Force. This includes tankers from Cabarrus County, along with tankers from south Iredell and southern Rowan counties. PHOTO credit: WBTV