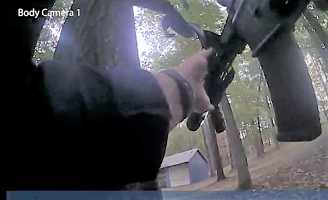 WSOC TV is reporting that body camera footage has been released by the Raleigh Police Department after a mass shooting in mid-October that left five people dead. Police said the suspect, identified by his parents as 15-year-old Austin Thompson, was captured more than four hours after the shootings began on October 13th in the Hedingham neighborhood of Raleigh.