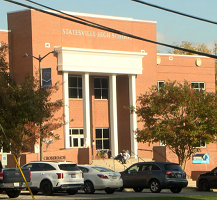 WBTV is reporting that nine juveniles have been charged after a large fight broke out at Statesville High School on Friday, officials said. According to the Statesville Police Department, police responded to the school to aid resource officers in breaking up the fight. Police said the juveniles are facing charges including disorderly conduct, disorderly conduct by fighting, assault on school employees, communicating threats, simple assault, and failure to disperse on command.