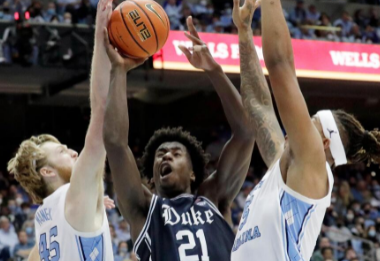 A.J. Griffin scored a season-high 27 points to help the Blue Devils beat the rival Tar Heels 87-67, earning a fifth straight win overall in Krzyzewski’s final visit to Chapel Hill. Duke shot 58% and took all drama out of the renewal of the famed rivalry early in both halves, both in building a big lead and then stretching it back out after the Tar Heels had made a run to climb back in it. The win allowed Duke to give Krzyzewski a 17th and final victory in the Smith Center, where he coached against the Tar Heels in its opening game in January 1986. The Blue Devils return home to host Virginia tonight, while the Tar Heels visit Clemson tomorrow.