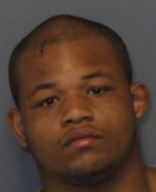 A Greensboro inmate who assaulted a detention officer in 2021 will serve at least 10 years in prison after pleading guilty of charges stemming from the attack, according to a local district attorney’s office. Guilford County Assistant District Attorney Chris Parrish says a judge sentenced Elijah J. Evans to serve from 10 years and six months up to 15 years and five months in prison, the maximum sentence allowed under the law, the News & Record of Greensboro reported.