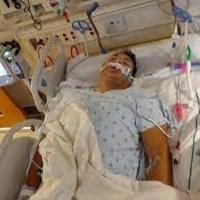 WBTV is reporting that 16-year-old Tylin McDowell took a hard hit while on the football field for Mt. Pleasant against the Maiden Blue Devils. About 24 hours later, Tylin was found unconscious. He was rushed to the hospital where it was determined that he was having a stroke. Tylin had emergency surgery to remove a clot before being flown to Levine Children’s Hospital where he is now recovering. Our thoughts and prayers go out to Tylin for a speedy recovery.